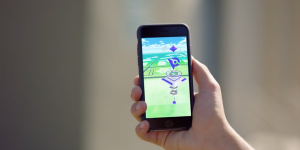 When I was younger, I often remember playing Pokemon on Nintendo 64, and opening the fresh pack of cards to try to get the best ones. In the world we live in, people are consumed by technology.  The game play for Pokemon Go is brilliant, and only expanding.

Within only three days of the launch of Pokemon Go, the game surpassed the number of twitter daily users, and had more engaged in the game than Facebook.   The technology, known as augmented reality, has allowed for Pokemon GO to create computer-generated images that people can see in the real world.

One of the major buzzwords of marketing is Social Local Mobile marketing, in which games are a direct way for local companies to market their product, or service that they offer.  Pokemon GO illustrates the full realization of this concept, as businesses are seeing big gains in sales due to the amount of foot traffic in the region. If you own a brick-and-mortar retail store, one way of boosting traffic is to combine check-ins, potential discounts for items, and other marketing techniques to boost overall conversion of people using the game.

Pokemon provides a mix of online and offline engagement that allows the user to feel like they can have the opportunity to grow in the game by simply playing it.  The rise of Pokemon Go is part of a broader trend in how marketing is adapting and evolving with technology.  Cheap digital sensor technology allowed Pokemon GO to be possible, but the broader realization is that this is only the beginning to a much more sophisticated system that will create widespread platforms for communication and consumer interaction.

Brands are currently looking into possibilities of creating their own game, which allows them to engage with consumers directly.   The possibilities are endless with the branding capability that exists with Pokemon GO, and technology overall.  Just as Facebook has implemented advertisements, the possibility for companies to purchase advertisements, or sponsored Pokemon characters could be part of the future in the AR space.  Pokemon Go explores a different element of consumer behavior, which requires brands to be aware of how to evolve with technology.

The average user on PokemonGO is 34 years old and younger.  The average user spends 33 minutes a day playing Pokemon GO.  Businesses are able to take advantage of the marketing potential of PokemonGO.

Let me know you how to build foot traffic using Pokemon GO, and a strategy to enhance for business overall.

Pokestops are spread out around a region, and provide users with items.  Pokestops are a key part to the game because you can attach a “lure” to the Pokestop to pick up items, and collect Pokemon that will spawn every few minutes.  Users are required to use the Pokestops, which provides the ability for your company to promote the locations near your business that will provide the most foot traffic.  The locations are spread out, but are often landmarks, or centralized locations that are prominent in the region.

You can promote the Pokestops via Facebook, Twitter, or other social media platform that you may use. Companies are using traditional marketing, such as creating flyers, and other forms of advertisement to promote their message.

Warning: Use of undefined constant php - assumed 'php' (this will throw an Error in a future version of PHP) in /home/customer/www/ampedagency.com/public_html/wp-content/themes/aqueduct/single.php on line 18